I did everything I could. I tidied the galley and washed all the dishes. I downloaded a weatherfax that showed 15 knots of northeast wind, 6-8 foot seas for the next 48 hours. I scrutinized all the cabins, stowing books and tools and snorkels and fins and all the other things that creep out from their places the longer we stay anchored. I spent two hours scrubbing the algae off the bottom of the boat so we’d sail as fast as we could. All I had left to do was lash down the surfboards, haul the dinghy up onto the foredeck, and pull in the flopper stopper, then crank up the anchor, set the sails and windvane on a compass course of 330 degrees and sail this boat the 100 miles back to Majuro.

By myself, because Brian was really sick.

It began with a mild fever and sore throat – a common cold, it seemed, though where and how he got it was a deep mystery. For the past three weeks we’d been in contact with exactly 12 other humans and none of them were ill. We were at Mili Atoll, anchored off Jabenwod and supposed to go surfing that morning, with Slade and Lanee from Eos II; I left him to sleep it off.

“Man Flu,” I joked with Lanee. “So precious and fragile when he’s sick.”

“Slade’s the same,” she agreed.

Two days of surfing, swimming and snorkeling and his sore throat, swollen glands, and fever weren’t going away, in spite of the soup made with the chicken from the family on Jabenwod, a gift thanking Brian for fixing their solar panel regulator. The soup was delicious, but it wasn’t working, so I dug out the antibiotics. He started taking Fluxocillin, a general purpose cousin of penicillin and the same drug he took when he had an infection and swollen glands while we were in Tonga.

Within 24 hours, the fever disappeared and the sore throat, which had been on the left side, seemed to back off. He perked up.

Big wind was forecast so we decided to move from Jabenwod to what we hoped would be a more sheltered anchorage, five miles to the east at Eneanejna. We said goodbye to the family and thanked them for the chicken and coconut crabs and left them several tins of food from our stores.

The anchorage at Eneanejna was gorgeous, but almost immediately Brian relapsed as the sore throat migrated from the left to the right, though the fever did not return.

“Maybe it’s one of those mosquito viruses?” Lanee and I brainstormed over a beach bonfire that Brian was too sick to attend.

“Do they have Zika here yet?”

“No, but they have Chikangunga. I forget the symptoms, but I can look it up when I get back to the boat. Maybe it’s dengue?

“Oh shit…maybe….but no, I think dengue involves total body meltdown. This isn’t that.”

The residents on call were stumped. And then it got worse.

The next morning, after radioing to say the symptoms for chikungunga don’t include sore throat, Eos II slipped away to explore another anchorage. I said we’d be right behind them, but then Brian seemed to lose all steam. His throat was so swollen and tender he could barely speak or eat.

“At the very least, you need to drink,” I urged him. “We can’t have dehydration on top of this.” I perused our mélange of painkillers, mostly leftover prescriptions donated by friends and family. After a pain pill kicked in, he managed to choke down some water and eat a few bites of food, which made him feel a little better, but pretty soon he was miserable again, the pain in his throat so extreme he couldn’t sleep, speak, or eat. He was listless, the sickest I’d ever seen him.

What I love most about Brian is his natural happiness, the unflagging optimism that keeps him singing Johnny Cash songs while he repairs the outboard for the XXXth time. He’s the one cracking jokes as we sail through a blistering squall. He’s the one serenading me with cheesy accordion songs. If he didn’t make me laugh everyday, there’s no way we’d have survived sailing 15,000 miles together, and still be out here.

Now he was so miserable he hadn’t touched his accordion for days. This was getting serious. We tried another antibiotic, coupled with codeine-laced cold medicine to help him sleep through some of the pain. I made coconut pudding and mashed potatoes and put fruit juice in the coldest part of the fridge, hoping these smooth foods might slip past his raw throat.

And I made preparations to sail for Majuro. The possibility of a nurse or doctor within Mili Atoll seemed like a long shot, and if there were a clinic it would be in the main village, over 20 miles away on the opposite – and dangerous lee side – of the lagoon. Even if we did anchor on the lee shore, rowing the dinghy through 4-foot chop, landing it safely, then finding someone who may or may not have antibiotics or other pain medications seemed a more stressful gamble than sailing overnight directly for the hospital.

And Majuro’s hospital, I’d been told, was gamble enough. It regularly featured on the editorial page of the Marshall Islands Journal, in scathing criticisms of the administration’s lack of management – for running out of embalming fluid so the morgue was unable to accept any dead bodies, for failing to install newly donated radiology equipment, for locking the public bathrooms instead of servicing them. Not long after we arrived, I’d asked a longtime cruiser-resident about the local medical care. She summed it up succinctly: “Don’t get sick here.”

Sick seemed here to stay. His condition remained the same for two and a half days. No better, no worse, and he was almost to the end of the Fluxocillin, though he was already taking another antibiotic and we had a third type in reserve. “Are you feeling any better?” I’d ask at hopeful intervals, but Brian would tenderly shake his head, his throat too sore to turn his neck. Sometimes he’d give me a so-so hand, but mostly he was incommunicado, drawing deeper into himself, trying to preserve the integrity of his body. He lay on the port settee or the bed, rigid, a boy in the bubble of his body’s pain. Occasionally, he’d wave to me meekly, a little hello transmitted wordlessly as if from behind thick glass, that made me feel even more alone.

What if he got worse? What if the fever returned? What if his throat swelled shut and he stopped breathing? Was I ready to perform an emergency tracheotomy with a fillet knife? What if I woke up and he was simply dead?

On the morning of the eighth day, these were my thoughts as I lay in our bunk looking out the port window at the pink light of sunrise flickering on the lagoon, black noddies diving for their first meal of the day. For the moment, I could hear him breathing beside me, actually, thankfully sleeping. I hoped conditions outside the atoll wouldn’t be too rough, that I’d be able to keep his discomfort to a minimum. I ran through my mental checklist again, all the things I’d need to do in order to depart: surfboards, dinghy, sailcover…maybe prepare a meal ahead of time and enough coffee to keep me up all night. I felt him stir beside me and I rolled over, away from the view and my heavy thoughts. He sat up, blond hair askew, his eyes little-boy wide, looking around our cabin as if he hadn’t seen it for a long time. Then he looked at me the same way.

“I feel better, baby,” he said. “I finally feel better.” He kissed me on the lips for the first time in days, then pulled me close to him and fell back asleep. 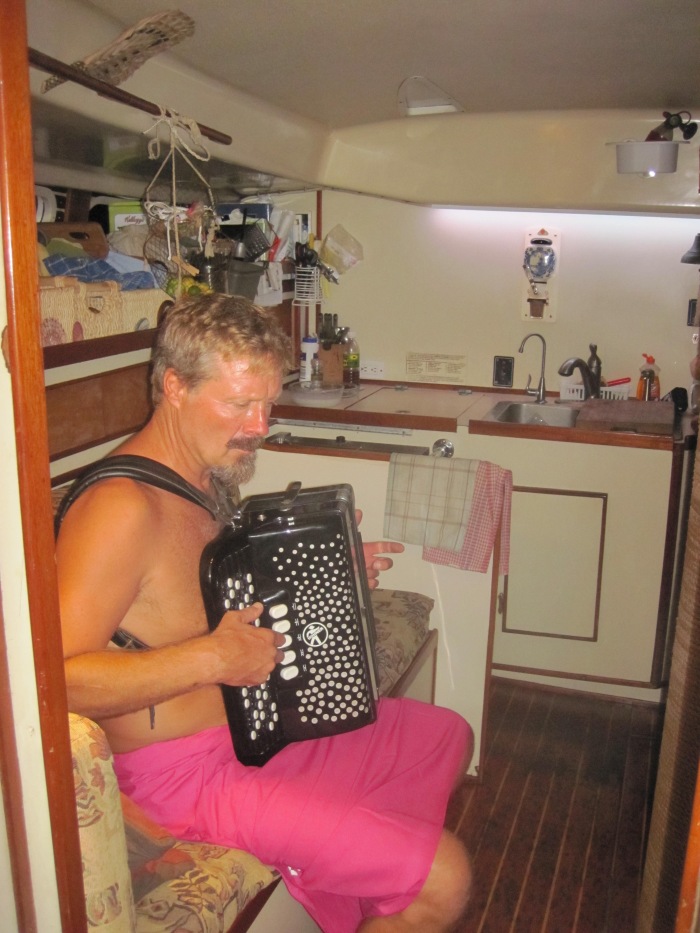 One thought on “Should I Stay or Should I Go?”