Click the image below to read a PDF of my story “Canoe Commute,” published in the Summer 2017 issue of Capital Magazine. 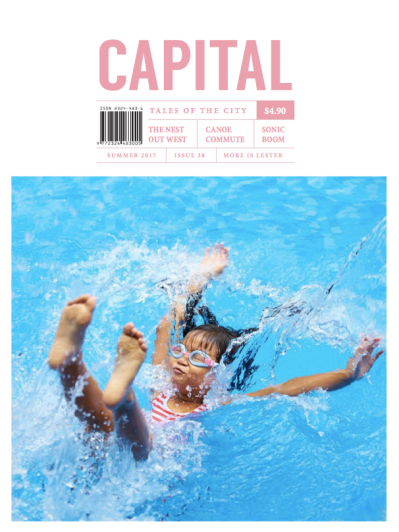 Click the image below to read a PDF of my story “Escape from Pago Pago,” published in the September 2017 issue of Blue Water Sailing.

Click the image below to read a PDF of my story “Play Surf,” about Fanning Island, published in the September 2017 issue of Capital Magazine.

Click the image below to open a PDF of my article “Sailing Canoes of Ailuk Atoll,” published in the January 2017 issue of Wooden Boat Magazine.

We stumbled upon it, during the waning hours of a day sail between one Leeward Society Island and another. Instead of continuing to the pass we’d planned for entering Raiatea’s lagoon, we made the spot-decision to sail through another, more easily made on the point of sail we’d enjoyed all day. Our Morgan Out Island was close-hauled in about 12 knots of breeze with barely discernable seas, the sun setting fast on a beautiful, blue sky tropical day. “This is one of those sails we’ll always remember,” Brian said. He was right, and the best was yet to come.

Our most informative cruising guide for the Society Islands, written back when I was in kindergarten, called the inner bays of this pass “isolated” and the authors confessed they hadn’t anchored in either one. Another guide described it as an excellent stop if you’re looking for tranquility, fishing, and surfing, but cautioned that coral growth made it impossible to transit from here to other bays within the lagoon. Charlie’s Charts had the briefest of mentions: “Passe Tiano is not recommended.”

END_OF_DOCUMENT_TOKEN_TO_BE_REPLACED

Our first Sunday in American Samoa dawned clear and blistering hot and all I wanted was to enjoy what we usually enjoy everyday: fresh sea air to breathe and clean, cooling water in which to swim. But we were anchored in Pago Pago.

All of the cruiser descriptions of American Samoa’s main port are quick to mention that the harbor is much cleaner and more tolerable than when the tuna canning factories used to dump the fish guts directly out the door, letting them stew in the narrow, enclosed, protected waters of the town.

Now they load the offal onto a boat and motor a few miles offshore to dispose of it, but the canneries themselves still smell like try pots for all the dirty underwear of the world. When black smoke billows out of the top of the Starkist factory, they’re making fertilizer, one local told us, which exudes it’s own greasy, noxious stink.

Between our boat and Starkist, an enormous generator roared 24-7, and from the hours of 8am-8pm, it was in stereo, as one of the resident cruising boats beside us ran his gen set all day. When it rained, which was daily, trash coursed down the city streets and streams and drifted by the boat in shimmery swirls of fossil fuel runoff. The American Samoa EPA posted ‘No Swimming’ signs along the shore and the daily paper ran a list of all the bays and beaches that had tested unsafe for swimming, which was pretty much all of them in the vicinity of Pago Pago.

I was craving the cool, pacifying effects of water, but it was Sunday in a country that had been ravaged by overzealous missionaries. END_OF_DOCUMENT_TOKEN_TO_BE_REPLACED 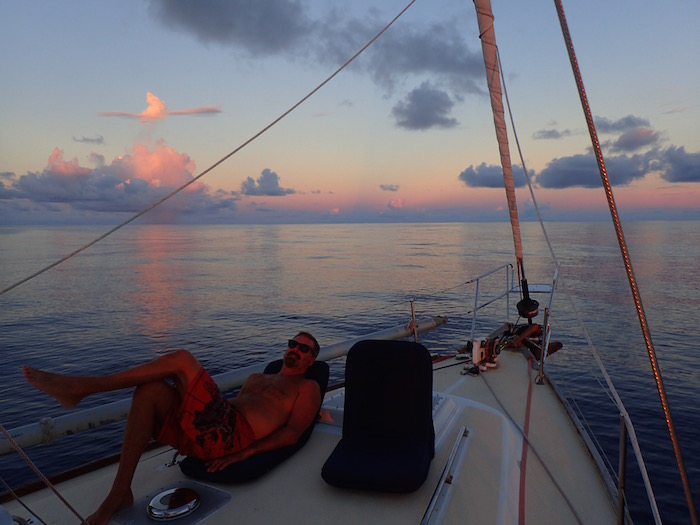 On July 2, 2016, we departed Majuro, Marshall Islands, for a long, upwind sail to Samoa. Crow flies, it was an 1800-mile passage that we thought might take two weeks, three at the most with the light winds that were predicted for our first few days at sea. It was 25 days later that we finally sighted the island of Savai’i on the horizon.

The first two weeks we had wind so light it barely filled the sails, coupled with seas so calm we felt like we were just hanging out on the boat while she happened to be moving. We deliberately went looking for the Equatorial Counter-current and a big part of our days were spent evaluating our progress and determining when the current was giving us a 1-1.5 knot boost and when we’d sailed out of its helpful push to the east. Evening squalls were easy going and it wasn’t until we dipped below the equator that the wind filled in from the southeast, eventually building to 20-30 knots and kicking up 8-10 foot seas as a passing low caught up with us. The last five days were the most difficult. Overall we sailed more than 2200 miles, averaging 75 miles per day, making this our slowest, longest, and most interesting voyage.

This is the passage in photos. END_OF_DOCUMENT_TOKEN_TO_BE_REPLACED

A version of this story was published in The Sun Magazine, Issue 493, Reader’s Write

After two days and nights at sea, we sailed our 41-foot sloop into the lagoon of Ailuk, a 13-mile long sandy atoll in the Marshall Islands, home to about 350 people, where the tallest point is the top of a palm tree. Minutes after the anchor was down and we were sipping a celebratory cold beer, we noticed a kid breaking from the pack splashing in the shallows in front of the modest village of cement homes and thatched huts. He was deliberately, doggedly paddling toward our boat, bucking the stiff 20-knot trade wind in his own little vessel – a rubber fishing buoy that must have washed up with the tide. It had been artfully sliced in half to resemble an oblong black teacup, just big enough for the kneeling body of a boy, with flip-flops hooked over his palms to extend the reach of his strokes. “He won’t make it this far,” Brian said. 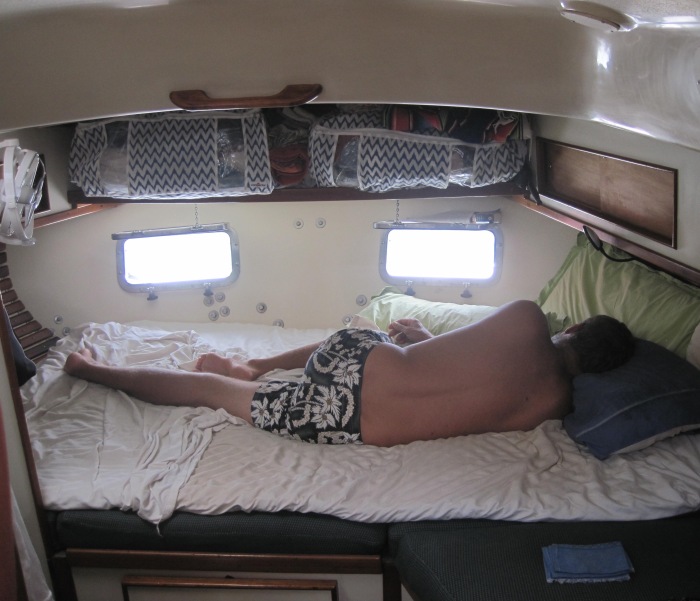 I did everything I could. I tidied the galley and washed all the dishes. I downloaded a weatherfax that showed 15 knots of northeast wind, 6-8 foot seas for the next 48 hours. I scrutinized all the cabins, stowing books and tools and snorkels and fins and all the other things that creep out from their places the longer we stay anchored. I spent two hours scrubbing the algae off the bottom of the boat so we’d sail as fast as we could. All I had left to do was lash down the surfboards, haul the dinghy up onto the foredeck, and pull in the flopper stopper, then crank up the anchor, set the sails and windvane on a compass course of 330 degrees and sail this boat the 100 miles back to Majuro.

By myself, because Brian was really sick. END_OF_DOCUMENT_TOKEN_TO_BE_REPLACED 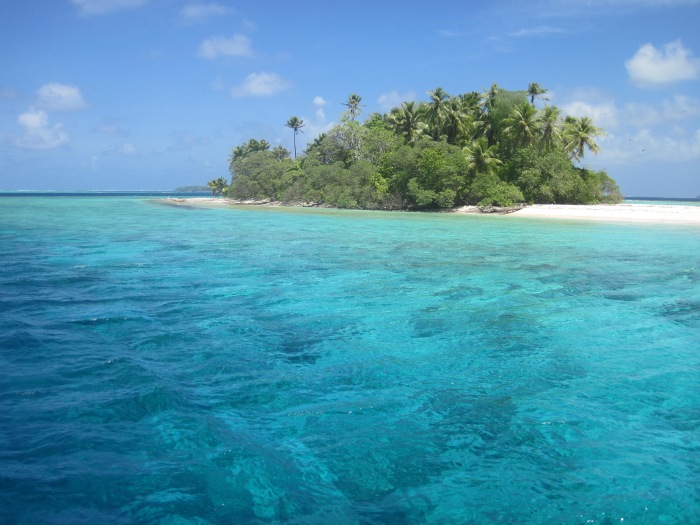 After we arrived in the Marshall Islands, we were warned against visiting Mili Atoll: the locals aren’t friendly and the Mayor might kick you out. There was all manner of scuttlebutt among the longtime cruisers, who swirl like driftwood around Majuro’s mooring field. Boats had been told to leave, cases of mistaken identity, bribes gone wrong. Mili’s reputation was so bad and the coconut telegraph so fiercely effective, it had been a few years since anyone we spoke to had actually been there.

But, we heard there were sweet waves for surfing, so we decided to risk it. END_OF_DOCUMENT_TOKEN_TO_BE_REPLACED